Yeah, okay; I get it. That covers a LOT of territory, and most of it doesn’t seem to over-lap much. What can I say? It’s been that kind of a weekend.

Well, yesterday was one of those dreamy days..sorta. Parts of it. See, the Maternal Unit, the Kidling and I were invited to a pig roast out a ways, at the Brother’s Lady’s family home. Which is right up the road from said Bro and Lady… and her daughter, the daughter’s horse, the dog and two cats.

For me, just getting away from the city, and relaxing someplace where you are more likely to hear birds than rap music blaring from cars, was heaven.

We did have a bit of a glitch in the Navigational System on the way down, which added an hour to travel time and lined me up for a migraine. Fortunately, we corrected course, I got a bottle of Coca Cola into me, and we made it where we were going.

I did mention the horse, did I not? He’s a sweet old gent, he is. The Kidling is horse-crazy, so being up close and personal to this old dear made her day. What made her WEEK was being allowed into the saddle after The Lady’s Daughter had a quick run-through of moves (Competition coming up next weekend) 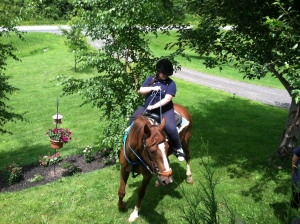 She was one happy camper, let me tell you. She did fall off…got tangled up dismounting, and landed on her butt. Got up, dusted herself off, and was ready to do it again.

Neither the Kidling or I got much accomplished today by way of chores, but we both got decent amounts of writing in. We share the hobby of writing Fan Fiction.  And, in some cases, that does cross over with my love of men in uniforms (and KILTS) Right now, the Kidling is working on an Agents of S.H.I.E.L.D. fic, and a G.I. Joe fic. I am working on one original bit of fiction, and one G.I.Joe fic. What can I say? I grew up with an uncle, cousins and brother who had Joes, and prefered their 12″ Joes as boyfriend material for my Barbie dolls over Ken. They were in uniform, they all had jobs, and they were better looking! Shipwreck, with those biceps, was usually drawn VERY well in the comics…. 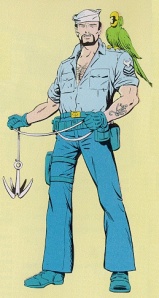 Okay, Okay… time to come back to real life. Sometimes, being an adult just isn’t as much fun.

I am a wife.mother, writer, cashier (hey, it helps pay the bills), Pagan who sometimes thinks too much. A jackie of all trades and mistress of none
View all posts by Mad Annie, Bronwyn, Ann →
This entry was posted in Current Events, Family, Life, Raising a Girl and tagged dreams, family time, fanfic, horses. Bookmark the permalink.

5 Responses to Pig Roasts, Dreams, Writing and Men in Uniform

Let me know what YOU think Cancel reply

This site uses Akismet to reduce spam. Learn how your comment data is processed.

Words of Wonder, Worry and Whimsy

News, Reviews, Tips and More for Fans, Collectors and Customizers of GIjOEs and other 1/6th Scale Action Figures

New concepts for an American Hero

We are all mad here
Two Kids Plus Dad

A Blog about a father and his two kids

Among the Crystals, Dragons, and Fae

Random thoughts on life, my world, and other stuff