So, a few weeks ago, the Maternal Unit had her right foot operated on. Same reason she had the left one done a year or two ago: Not only to scrape out the arthritic build up, but to take out the toe nails that were growing curved into her toesies instead of flat on them. This meant she couldn’t put any weight at all on this foot until cleared by her doc. She rented what the call a knee scooter, which was supposed to be easy to use. 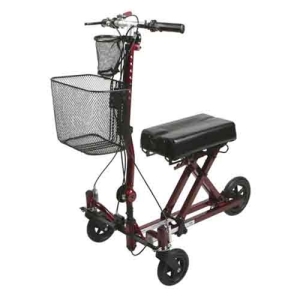 In the house, it was easy to use. My mother lives on the second floor. Carting that damn thing up and down the stairs, even just twice a week for doctor’s appointments, wasn’t happening. Enter friend and neighbor (and Mr Sarcasm Extraordinaire!) (I say that with much love. Phil is a GREAT friend to have, and so is his wife.) Since Phil has back issues, he owns his own collapsible wheelchair. He doesn’t use it much these days, so he loaned it to us, so I could take Mom to the doctor, shopping, and just out of the house. We kept it in my car when not in use. Last Thursday, the doc gave her the all-clear to start putting weight on the foot. She walked her own dog the next morning, we returned the wheelchair to Phil and the scooter to the medical supply place. The change in her attitude was like the sun coming out after the rain: My mother DOES NOT like to be hobbled.

Of course, she still is to an extent. She has a boot over the bandages to protect the toes and foot. She has a smaller platform type thingy to even out the elevations so she can walk without toppling over. But the boot! It reminded me right from the start of the boxy-looking legs/feet of Frankenstein’s monster. 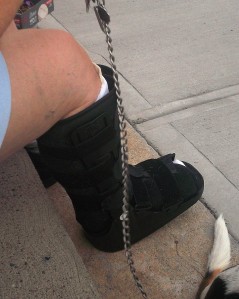 Hence, “Frankenfootie”! Yes, I have a strange and warped sense of humor.

I am a wife.mother, writer, cashier (hey, it helps pay the bills), Pagan who sometimes thinks too much. A jackie of all trades and mistress of none
View all posts by Mad Annie, Bronwyn, Ann →
This entry was posted in Family, health, People helping people and tagged Family, foot care, friends, humor. Bookmark the permalink.

Let me know what YOU think Cancel reply

This site uses Akismet to reduce spam. Learn how your comment data is processed.

Words of Wonder, Worry and Whimsy

News, Reviews, Tips and More for Fans, Collectors and Customizers of GIjOEs and other 1/6th Scale Action Figures

New concepts for an American Hero

We are all mad here
Two Kids Plus Dad

A Blog about a father and his two kids

Among the Crystals, Dragons, and Fae

Random thoughts on life, my world, and other stuff